It was a beautiful, perfect morning for my first actual triathlon since 2011 -- the Dunedin Rotary Triathlon at Honeymoon Island State Park. I mean business this training cycle. I am going to finish that stupid Ironman in September or die trying, and therefore I am going to have to do some actual shorter triathlons in the name of getting ready. This was one I could drive to and looked really pretty in the pictures on the race website, so I signed up. It's a sprint distance -- 1/4 mile swim, 12-mile bike, 5K run, so nothing challenging distance-wise, but still a good opportunity to practice transitions.

Everything about the start line was well-organized. I picked up my packet, got body marked, put race number stickers on my bike and helmet, racked my bike in the transition area, and laid out my stuff on a towel for post-swim and post-bike. The day started with the realization that I had forgotten my bike shoes. Seriously? I have NEVER forgotten my bike shoes when taking my bike somewhere for a ride. Maybe it had something to do with the fact that I didn't pack stuff up until 10:00 the night before. And did I make a list? No, of course not, because I was cocky, and the thought that I might forget something never crossed my mind. Lesson learned. For today I would be doing the 12-mile ride in running shoes.

I don't have a tri suit yet, and the water is way too warm for a wetsuit, so I was swimming in a regular swimsuit. I spent a lot of time debating whether I would need to change into a sports bra before the run. I decided I would not. One advantage of having a chest like mine is that I can run with hardly any support at all. I'm pretty sure I have actually run completely braless at least once, and I didn't die. I decided to try it again today. Just the swim suit, plus bike shorts for the ride. The shorts are necessary. That cursed bike seat and I are not on speaking terms. Oh, how I wish a new bike seat would descend from the sky and install itself on my bike!

I watched the swim waves before my wave go off, every 3 minutes. Each wave had a different color swim cap; we were purple. The swim was very simple -- swim straight out to a giant buoy, turn left, swim to another buoy, turn left, and swim straight in to shore. As the purple cap wave was standing in the water waiting to take off, we saw a silver cap from the wave before us coming back in from the ocean. The guy had a big grin on his face, and also a really muscular body. He did not look like someone who should have turned around so quickly. I still don't know what the story was with him. Scared of a first ocean swim? I guess that's a possibility. But the siren went off before I could see what happened with him, and I started swimming.

For being as lousy a swimmer as I am, I have remarkably little fear of open-water swimming or of mass-swim starts, of which this was my first one. I did get feet in my face, and I also swam on top of people accidentally. I swallowed a little bit of ocean water during the chaos, but that didn't bother me either. It took less than a minute for the swim to start feeling good. Water temp was perfect, the buoy was so huge it was easy to see so sighting wasn't even an issue, and best of all, I wasn't the last person in my wave. Every time I looked behind me, I saw plenty of people back there, and some were clearly less prepared than me because they were dog-paddling or even going inside the buoys to rest. As I always say, nothing makes me feel better in a race than seeing other people doing worse than I am. If that makes me a jerk, oh well. I finished the swim in just under 10 minutes and ran up the mat back to the transition area. 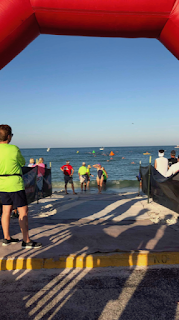 In transition, I found my bike, pulled on my bike shorts over my swimsuit, put on socks and shoes, buckled my helmet, and thought one more time that it would have been nice to have my bike shoes. Oh well. I decided I did not need my gloves for just 12 miles, and left them in transition. Then I ran with my bike to the mount line, with a T1 (first transition) time of 2:55. ("Mount line" sounds dirty, but it just refers to the designated line you have to reach coming out of transition area before you can get on your bike. If everyone got on their bikes at the places where they were racked, there would be collisions right and left, so it's mount line for safety.) 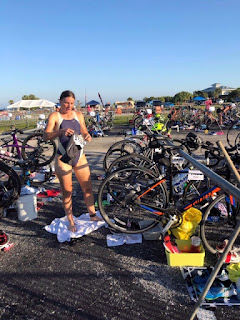 This would be a good place to say that my second big error of the day -- forgetting bike shoes being the first -- was that I never reviewed the "Triathlon" function of my Garmin. I assumed I would remember how to do it. I thought you just start it when you enter the swim, pause it when you leave the swim, start it again when you start the bike, et cetera. First of all, I forgot to pause it when I came out of the water. I remembered when I was running with the bike out of transition. I started it again when I got on the bike, but for some reason it was making the lap sound every 15 seconds. I had no idea why. I stopped it completely just because the lap sound was so annoying. Homework: learn how to use the Triathlon function.

The bike course was two loops of an out-and-back down the causeway, with gorgeous sparkling ocean on both sides. Although I was doing better on the bike than I usually do, I was still sucking compared to most people. I was being passed right and left -- sometimes by people with much nicer bikes than mine, but not always. There were two bridges on each out-and-back, so four bridges total on each loop, and even though they were very small, I was still sucking wind climbing them. Most people slowed on them, even the fast people. I have decided that Floridians just are not good at hills of any type. I have no complaints about the bike course. It was easy and beautiful. My only complaint is myself ON the bike. It took me 42 minutes to go 12 miles, not terrible but I definitely need to improve before September. The lack of bike shoes was annoying but I can't blame my slow speed on that, much as I would like to. 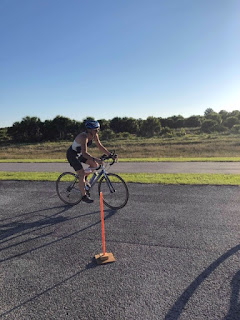 Back in transition for T2, all I had to do was rack my bike again and swap helmet for cap. Oh, and suck down a gel. I shouldn't really have needed any fuel for this short of a workout, especially considering I had McDonalds on the drive up, and a Clif bar at the start line, but for some reason I was hungry. I drank half my water and then ran out of transition and onto the run course with a T2 time of 1:26, not too bad. I did think one more time that I hoped I wasn't making a mistake by not putting on the sports bra.

Most of the run course was on trails, but the first part was on a section of beach. I HATE running in sand. It is my least favorite run surface. I was already out of breath, and the sand just made that worse. Still, everyone else was suffering equally. The sun was out, and it was, of course, hot, although not too bad for May. Everyone seemed to be gasping for breath. While breathing never got easier during the three miles, I was in better shape than most people around me. I tried to relax and enjoy what I knew to be one of the best parts of the race for me -- picking off people in front of me. I am a slow swimmer and a slow-to-mediocre cyclist, but I am a relatively good runner. I started counting the number of people I passed -- 41 total, in a race with 316 people. Not too bad! (Full disclosure, I was also passed by ONE person. Well, really two because one of the women I passed in the first mile kicked past me in the finish chute, darn it! And she was in my age group too -- double darn.) The lack of a bra was never an issue. My suit worked just fine. I was too busy watching out for roots and rocks to ever think about what I was wearing. I finished the run in 25 minutes. I think I would have been a tiny bit faster on pavement, but I'm OK with 25 minutes. 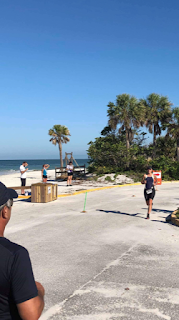 Things I'm happy about:
*I have no fear of the mass swim start, even when someone else kicks me or swims on top of me.
*It was easy to see the buoys.
*I was pretty fast in transitions.
*I still have my superpower of being able to run well off the bike.
*My friend Nick took awesome pictures that make me look more or less like an athlete. I know my mom will appreciate those!

Things I need to improve: BIKE, BIKE, BIKE
*I need to replace that seat. NEED to, cost/inconvenience notwithstanding.
*Aerobars don't do me any good if I'm too nervous to use them in a race setting. Just because I can creep along in them when nothing else is on the road doesn't mean I actually know how to use them.
*I might want to clean my bike some time. It has mud on there from a dirty ride a couple months ago. I've never cleaned the chain.
*I need to do strength training for my legs. Chattanooga has HILLS -- not just causeway bridges.
*Will someone just tell me to buy a new bike?
*A tri suit is going on my to-buy list, sooner rather than later.

Overall, this was an excellent day and I enjoyed every moment of it. I am so lucky to live in such a beautiful place! Just look at the blue skies, palm trees, and ocean in the pictures! I don't think I would ever have been in such a good mood at any triathlon in Michigan. I'm happy to be excited about triathlon. That's sort of a novel feeling. I just assumed I would always hate it. Oh, and one more thing. When I first looked at the race shirt, I thought, "Meh." But then when I put it on when I got home, I realized that it has one very important, very rare, very valuable quality that ensures I will keep it and wear it often. This quality is very hard to find in race shirts. Because of the design... I DON'T HAVE TO WEAR A BRA UNDER IT. Yessssssssssssss. 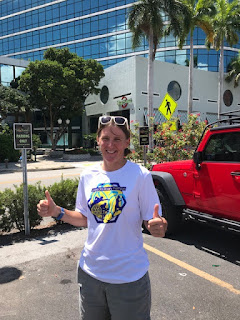