I am so thoroughly sick of this subject. I feel like Ironman training is the most boring thing in the world, to hear about, to read about, and to write about. Nevertheless, in the interest of chronicling the Ironman journey, just in case I some day look back and find it fascinating instead of tedious, I'm going to keep on writing about it.

January 1 I officially started training for Ironman Texas, which happens on 4/27 in The Woodlands, Texas. I switched training plans, from an old free one I found online to the Intermediate program in Be Iron Fit. I thought this would be an improvement because it included interval swim sessions instead of just straight swimming, and because the run and ride sessions were based on time, not distance, so it made workout planning easier. I also thought it would be easier to train than it was last summer for two reasons: 1) I wouldn't be training in the heat of a Florida summer, 2) I make my own schedule at work, so if I want to do all my workouts in the morning (knowing that I will work several evenings each week), it's easy to just put them into my schedule like I would anything else, and 3) I borrowed an indoor trainer from one of my neighbors and set it up in the garage, so I don't have to worry about riding on dangerous Moccasin Wallow Road and I can still ride even if it's cold (cold, for purposes of outdoor cycling for me, being anything below 70 degrees). However, there are two big things that were different this training cycle than last. The first is Pip. Having to leave Pip alone for any extended period of time, especially on a day when I've already been out of the house for several hours, makes me feel terribly guilty. It did help that I could get Pip set up in the pain cave and that she, being a very patient and mature puppy, is tolerant of long periods of inactivity: 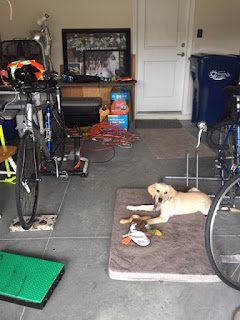 But I still feel guilty for not spending as much time as possible working with her and hanging out with her. The second thing that was different this training cycle was the very fact that I can make my schedule. Instead of a strength, it became a weakness. What happened was this: Pip could only make it about 4-5 hours at night without having to go out. She must have the tiniest bladder in the world. But once she got me up at 3:00 or so (which used to be my normal wakeup time when I went to the gym every morning in Michigan!), I felt awake, so I wanted to stay up and read for a while. "A while" = "until I got sleepy," at which point I wanted to go back to sleep for a couple of hours, until I had to get up to get ready for work. I have become completely addicted to this routine, to the point where I can't even imagine forgoing it to work out in the mornings. And I can't really blame this on my schedule when mental weakness is obviously the true culprit.

Even with those two things going on, though, I was following my schedule and not skipping workouts. I even bought my wetsuit and swam in it a couple of times, until the ocean water got so cold that I refuse to swim in it till it gets back to at least 70. I learned to tolerate the trainer with the help of Netflix. My performance was lousy for some reason. I had gotten faster at swimming and biking while training for Florida, but my speed both in the pool and on the bike has decreased and is now almost as bad as it's ever been. For the swim, I blame the fact that I seem to be unable to get up and go to Masters Swimming at 5:30 a.m., which is usually about the time I'm going back to bed. For the bike, I blame the fact that it really needs a tune-up and that something is wrong with the brakes. Twice after long rides where it was all I could do to maintain 14 mph, I have gotten home and found that the brake pads were rubbing on the rims. For 40 or 50 miles. I didn't know how to fix that, so it just kept happening. My bike also developed a squeak that was so bad I had to blast music on my earbuds. Netflix and audiobooks weren't loud enough; I could hear the squeak through them. Clearly, my bike needed some attention.

Nevertheless, when I started my two-week work trip to Texas, I brought all my workout gear including my bike and trainer with the thought of skipping as few workouts as possible. I knew I would skip a few, probably mostly swim workouts, because I didn't want to leave Pip alone in my hotel room. But I didn't see any reason why I couldn't bring Pip with me to the treadmill in the hotel fitness room, and ride my bike on the trainer in my hotel room. Sound plan -- it just didn't happen. First, I forgot how tiring work travel is. I love my job and I had a blast in Texas working with puppies and puppy raisers. But when I got back to my hotel at night, I had energy to shower and maybe read a book, and nothing else. I did try the trainer once. But 1000 miles in the car had not magically fixed the squeak. Instead, it was even louder, more like a squeal than a squeak. It was so dispiriting I knew that even if I had the energy, I wouldn't ride it. And as for the treadmill, the one in the first hotel was non-functional, and by the time I got to Week 2 in the second hotel, there was no way I was getting on that treadmill even if it was functioning. I did manage one swim in Dallas and one individual standard-distance tri in a Lifetime in Houston on a weekend pass. That went absolutely terrible -- my slowest swim in months and what felt like prolonged death on a spin bike, although I have to admit my 10K treadmill run felt unbelievably good. (One thing I have strong faith in is my ability to run after biking. I'm just good at that. If I make it through the swim and bike, I know I will make it through the marathon.)

Then, on my second-to-last day in Texas, I had a few spare hours and went to look at The Woodlands, the community just north of Houston where Ironman Texas is held. I didn't care about the run and bike courses, but I wanted to get a look at the swim, which starts in a lake and finishes, for the last half-mile or so, in a canal. I did not like the sound of "canal." That did not sound like a nice place to swim at all. But I suspended judgment and went to look.


As soon as I saw it, the first thing I thought was, "No." The canal is pretty enough to walk along if you don't look too close. It's in a nicely landscaped park, and lined with trees. But the water was a dark-green color and completely stagnant, with an oily sheen on top. The only time I saw any moving water in the canal was when ducks paddled by and disturbed the water. There were plenty of ducks. Maybe that's why the water was so green -- because it was full of duck poop? I walked the canal, and walked and walked, looking for the place where it joined the lake where the swim started. I couldn't find it. My shirt was completely soaked through with sweat, and it was 69 degrees and cloudy. I didn't know what the temperature would be in late April, but I was pretty sure it would be warmer than early February, and I was also pretty sure that the humidity would be higher, although it felt like it was already over 100%.

As I drove back to Houston from the Woodlands, I was thinking that I did not want to do this race. Not only did I think the swim was disgusting, I was worried about possibly not being able to wear a wetsuit. If the water temperature is warm enough -- somewhere around 84 degrees, I think -- no one is allowed to wear a wetsuit. With my lousy swim, I NEED the help from the wetsuit to make the time cutoff. But I also know that I would be very hot in a wetsuit if the water temperature was, say, 82 degrees. Starting a very hot bike ride already hot from the swim sounds like a terrible idea.

Then there is also the drive. I've always known I don't want to bother flying and shipping my bike. The Woodlands is about a 16-hour drive from where I live, so that means either two 8-hour driving days each way, or else busting it out in one day. I did the one-day version on my way home from Texas, and I do not want to ever do that again. I especially don't want to do it tired and sore after a 17-hour race, OR depressed and mad after not making the swim or bike cutoff. But I also don't want to use up vacation days recovering in Houston, or in any city between Houston and Palmetto, to be honest.

I do not want to do Ironman Texas. I'm pretty sure that I'm going to forfeit my registration fee and pay again to register for either Chattanooga or else Florida again. I am really torn between these two. Advantages of Chattanooga: downstream swim, happens in September instead of December so I can get it over with sooner. Advantages of Florida: swim is in the ocean and I can practice in the ocean, shorter drive (5 hours vs 10 hours), flat bike course compared to Chattanooga's hilly one. I really can't decide between these two -- any advice from anyone knowledgeable is appreciated! -- but I am pretty sure that Texas is out.