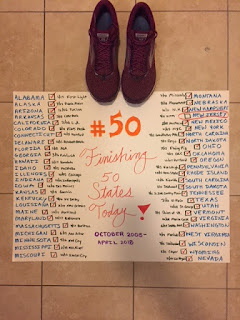 THANK GOD I bought the K-tape, that was my prevailing sentiment after completing my 50th state marathon in New Jersey.

Let me back up. My hip is messed up. Does everyone know that? With the help of Dr. Google, I diagnosed myself with bursitis. One of the reasons I thought "bursitis" is because it's worse, much worse, when I run hills, like I did last weekend at Garmin. I destroyed my hip at Garmin. I felt like someone pulverized it with a hammer. I hadn't run since then, and hadn't walked much, either. Mostly I sat on my ass in the car, road tripping between Kansas City and New Jersey and eating out for every meal. Poor nutrition and weight gain did not help my hip at all. It was so painful that I was still gimping and wincing the day before the race every time I had to walk.

The night before the race, we stopped at Target to pick up more road trip snacks. I had the idea to look for K-tape. They had some. It was $16 and I wavered over whether to buy it or not because $16 was a lot. Finally I bought it and pulled up a You Tube video back at the hotel. I followed the directions, and WOW. K-tape with me is hit or miss. With some pains it doesn't work at all, and might as well be snake oil, and with other pains it is like a miracle cure. It was a miracle cure for my hip pain. Talk about instant relief! I had been living with this pain for long enough that the removal of it was exquisite. Now that my race is done and my medal is safely in my possession, I can confess that I wasn't sure I could complete that race right up till the time I put the tape on. I remembered how much pain I was in at Garmin and wasn't sure I could stand another 26.2 miles of that, even with the stakes as high as they were. But now that you know how it ended, let me present my race report.

All right. New Jersey as #50. Why? I'm not sure of exact statistics, but I know a lot of 50-staters finish in Alaska or Hawaii, for obvious reasons. Those are exotic places, and marathons in 50 states is a big deal, so why not finish in Alaska or Hawaii and celebrate? I totally understand that, but I picked New Jersey for a couple of reasons. One is that I actually lived in New Jersey when I ran my first marathon, Chicago, in 2006, but I had never run a marathon in New Jersey. But the bigger reason was that I thought finishing in New Jersey would be funny. New Jersey is good for two things, and two things only, in my opinion: #1 -- It is the home of The Seeing Eye. #2 -- Over the past five years of living in Michigan, New Jersey has served to remind me that there is at least one place worse than Michigan. New Jersey has all of Michigan's climate problems but, unlike Michigan, it is also really expensive and full of rude people. Even on the worst days in Michigan, I could be glad I wasn't in New Jersey. Finally, I just enjoyed the look on people's faces when they asked me what would be my last state and I answered, "New Jersey." It was always the same -- their faces would kind of wrinkle up a little, and then they would say, "Why New Jersey?" That was more interesting than the generic "awesome!" I knew I would get if I answered "Alaska" or "Hawaii."

Will and my mom were there to help me celebrate. For once, race weather was predicted to be nice, sunny and cool with temps in the 50's all day. That is perfect marathon weather. Finally! But when I woke up on race morning, blessedly pain free, it was raining. The rain got harder as we drove to the start line at Monmouth Park racetrack. Optimistically and foolishly, I had not brought any type of rain gear at all, not even a trash bag. I will never learn, apparently. How hard is to stuff a garbage bag in your suitcase? Obviously too hard for me. I sat glumly in the car listening to the rain drum on the roof until I couldn't wait any longer to get in the Porta-potty line, and then sucked it up and got out. I hid under my umbrella while Mom and Will got wet. (I offered it to them, but they declined.)

The New Jersey Marathon is actually a pretty cool race, much better than I was expecting. It starts at the race track in Oceanport, and then weaves around through affluent communities in Long Branch and Monmouth Beach before turning onto Ocean Avenue through Deal, Allenhurst, and Loch Arbour to Asbury Park for a long semi-out-and-back. (I say semi because there are little detours off Ocean Avenue, especially on the "out" part, random loops through neighborhoods to get to 26.2.) This course is flat as a board. Thank goodness for that, because hills are hard on my hip, and would have been even with the K-tape, I bet.

The race was also bigger than I expected. I confidently told Mom and Will that the crowds would thin out once the half-marathoners split, so that they could easily find me, but that didn't happen. I ran with a crowd nearly the whole way. There were also quite a few spectators. Weather was perfect -- sunny and breezy. I was never cold and never hot.

At Mile 10, right after I saw Mom and Will the first time, and had just started to settle in and enjoy myself as I realized my hip was not going to give out, I had a little problem: my earbuds stopped working. One second I was happily listening to Eminem screaming, "Oh wow, boo that pow, ooh ow I need a cigarette now! Oh I'm so fucking hot, and you're so fucking hot--" and the next second there was silence. What the...? I pulled the earbuds out and looked at them. The blue power light was on. I pressed Play again and heard a strange beep from the earbuds. I took my phone off my arm and checked Bluetooth. Earbuds disconnected. I turned them off and on again, and pressed Connect again. A turning circle and then "Unable to connect" was all I got. These things last for eight hours sometimes; no way was it a dead battery. Oh well; I couldn't mess with them all day. I shoved them in my waist pack and got going again, but slower and with less motivation.

It was a long seven miles from the spot where my earbuds died to Mile 17 where I saw Mom and Will again, right by the iconic Asbury Park Tillie mural. Tillie is this creepy dude here: 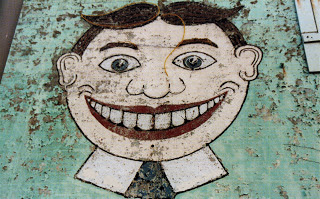 After Tillie, the course went onto the boardwalk, where it mostly stayed until the turnaround between Mile 18 and Mile 19. Then we returned on almost the same path we had taken out until we got to about Mile 25. There we moved onto the Long Branch boardwalk for the last mile. That was probably my favorite part of the course. It was beautiful, with blue sky and the ocean looking stunning directly to my right. I watched the waves rolling in and the big ships out on the horizon and almost forgot that there was a headwind and I was tired and a little bit queasy from swallowing too much air. I did manage to run all the way to the finish even though I really wanted to walk. One does not finish one's 50th state marathon at a walk, especially not when it is being videoed and will be broadcast on Facebook. I finished in a mediocre (chip) time of 4:26 or so; I still haven't looked at my official results. Will and my mom were there with posters and roses, and that was better than anything I got from the race, which had really lousy finish line food and NO CHOCOLATE MILK! Come on. Everyone knows that chocolate milk is the best recovery food ever, right? Get with it, New Jersey Marathon.

Before I finished 50 states, I thought it would feel like a momentous accomplishment. Certainly people treated it as such on Facebook. But the truth is that it really doesn't feel like anything much. I wasn't thinking, "I'm finishing 50 states today!" during the marathon; mostly I was thinking, "This sucks and I want to be done," just like I always do during every marathon. At the end, I wasn't contemplating the enormity of what I had accomplished; I was thinking about driving back to Michigan, packing the house, and moving to Florida. I think the loudest thought in my head was, "Now what?" Ironman? Finish the book? Vanity MFA in creative writing? This is further proof, if proof was needed, that the pleasure in the journey, not in the achievement. 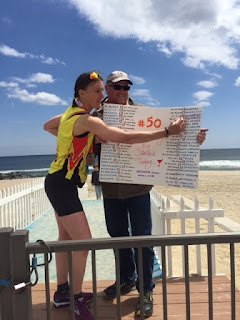