I have been complaining non-stop about the terrible cold in Michigan for months now, ever since that awful moment when I returned from my Christmas trip to California -- where the weather had been California-perfect -- at midnight to clean eight inches of snow off my car and then scrape the ice off the windshield. That was one of the most depressing experiences of my life, and it was followed by a six week cycle of extreme cold then a big snow dump. (Okay, I admit there was ONE nice week in there somewhere, but even the nice week resulted in a huge snow melt which resulted in mud. So it still sucked.) The A1A Marathon in Fort Lauderdale, Florida, had a forecast of 80 degrees and sunny. While I knew I was not acclimated to those temperatures, I didn't care. I was just excited about feeling the sun on my skin again.

The Fort Lauderdale/Miami area was pretty much the last large metro area in the U.S. that I had left to visit. It didn't disappoint, especially Miami. I suspected I would like it because it's hot and people speak Spanish everywhere, and sure enough, I did. I met my marathon friend Dennis at the Fort Lauderdale airport and started our adventure.  First stop was a Cuban restaurant for breakfast. Obviously people who know me can take one look at this place and know I would love it, and I did: 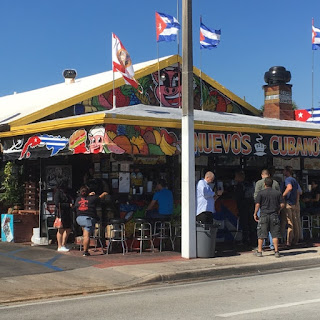 I had eggs and peppers on Cuban toast, which is like Texas Toast on steroids, and Cuban coffee, which is a little bit of coffee on top of a layer of sugar. SO GOOD. While we were standing in line, a guy with a big pack walked up and stood next to us. At first I thought he was a homeless dude who was going to ask us for money, but then I noticed that his gear was Deuter and North Face and he was clean, so I figured there was another story. When I asked him, he said he was hiking from one end of South America to the other, and came back to the U.S. in the middle for a family thing. It turns out he has a blog that is full of gorgeous pictures of South America, so if you like looking at those, check out this blog.

After the Cuban restaurant, we went to the expo and picked up our bags. The T-shirt is just OK -- one that I'll wear to a couple of upcoming spin classes solely to advertise "I just did a marathon" and then dispose of. The expo was good-sized. And the sun was HOT. I mean, it felt good, but my clothes were soaked with sweat and I felt like I was sizzling just walking around outside the expo. I realized that tomorrow's race was not going to be enjoyable, even though I liked the sun. I was totally unaccustomed to running in anything other than the 65-degree gym weather at Lifetime, AND I didn't feel like doing a marathon when I just did one a week ago. Oh well; all I had to do was finish and bring home the medal.

We drove to Miami in search of the Bay of Pigs museum only to find it was closed, but, hey, we were in Little Havana, which was where I wanted to go anyway. We stopped at a Cuban bakery -- just as good as a Mexican bakery -- and then walked around Little Havana for a while, just long enough to even get a little bit of an appetite for dinner. Verdict on Miami: I liked it.

Back in Fort Lauderdale, we found an Italian restaurant on Yelp and it was SO GOOD, one of those places where every bite is its own amazing experience and even as you're getting full, and then stuffed, you're wishing the experience wouldn't end. Way better than Shoney's in Greenville last weekend.

This race had an early start, 6:00 a.m., totally necessary because of the heat. I was up by 3:30 because I had to go to McDonalds. There were two cars in front of me in the drive-through line and the driver of the one in front of me laid on his horn and yelled out his rolled-down window, "Hurry up! I don't have time for this social shit!" I guess in his opinion the person at the window was talking for too long. This would be a good place to say that Florida has the worst drivers I have ever seen. The stereotypes are true. I remember thinking this on my trip to Jacksonville a year ago too. The two annoying things I saw the most often were driving too slow in the left lane and passing at excessive speed on the right. These were probably two related problems -- the old people with the mindset of "I'm going the speed limit and no one has any right to make me go faster" and everyone else with the mindset of "Get out of my way, old people!" who step on the gas with extra frustration as they zip by on the right. However, I also saw every other kind of assholery behind the wheel, and my conclusion after my time spent in Florida was that you should always expect a Florida driver to do something unpredictable and jerky if it's possible. If they can refuse to let you merge, swerve into your lane without signaling, or slam on the brakes with no warning and for no reason, they probably will; if they don't, let it be a pleasant surprise.

Anyway! Back to the race. The start and finish lines are about four miles apart, and the race gives the option of parking in either place, since they shuttle from both ends. The race website claimed that there were 13 shuttles and that they would run continuously from 4:00 a.m. to 1:00 p.m. We decided to park at the start because we thought the finish would be more congested. If you ever do this race -- PARK AT THE FINISH!! Parking at the start was a big mistake. More on that later.

It was very hot and humid at the start line. The day was bad even from the start because a runner collapsed while waiting for the race to start. I don't know what happened to him, but whatever happened to him, at least he did not have to do the race. This race started downtown and went three miles out to A1A. A1A is an iconic beach highway. (If driving it on a sunny weekend day, you can move at approximately three miles per hour through Fort Lauderdale due to congestion and beach party traffic.) It was tolerable as the sun was rising. Sunrise over the Atlantic is pretty, no doubt. At Mile 4-something, we turned into Hugh Taylor Birch State Park for a 2-mile loop. Many people enjoyed this part of the course; I did not. I was already hot and cranky and didn't feel like running, and I knew that the best parts of the race were almost over.

Around Mile 6, we were back on A1A, for a tedious out and back. Our route took us past lots of beach condos whose residents appeared to be mostly still asleep, or at least they were not out cheering us on. Then we left the beach and A1A turned into just a tedious highway past office buildings and shopping plazas. Thankfully, there was cloud cover for almost the whole race.

At Mile 13, there was a Marathon Maniac handing out popsicles. She had also been at Mississippi River Marathon the weekend before, and I had heard her talking about the popsicles. I just hadn't introduced myself because I had a spot under a tent where I wasn't getting rained on, and she was standing out in the rain. The popsicle was one of the few highlights of this race, both going out and coming back. Mostly I was just saying to myself, "I hate this race, I hate this race," for most of the 26.2 miles.

Around Mile 14, we did a loop through a neighborhood and then headed back. The scenery had not improved between the "out" and "back" portion. This really is a tedious course, even if I had been in a good mood and it hadn't been a million degrees out. The sun came out for real at Mile 23 or so, and those last three miles were endless. I walked... a lot. There was full sun and only occasional palm-tree-shadow-width strips of shade. My time was going to be disastrous and I didn't care. I knew I would be lucky to finish under five hours.

I did finish under five, but not by much. The medal was a blue jellyfish complete with plastic tentacles -- unique, but not one of my favorites. The finish line food was unimpressive, not that I could eat it anyway. I was way too nauseous to want to eat. When Dennis finished, we went to wait for the shuttle, and this was the final crappy thing about the race -- the shuttle took 45 minutes to arrive. What happened to the "13 shuttles running continuously" that we were promised? I don't know. Once on the shuttle, it took over half an hour to creep four miles in traffic. Some people on the bus were worried about getting to the airport on time. Thankfully, I wasn't late for a flight, but that didn't stop me from being annoyed.

Florida was State #47 and even though this race was fairly well-done, except for the shuttle issue, I can't recommend it. The pretty ocean sunrise didn't make up for the boring rest of the course. There's got to be a better Florida marathon than this one. Then again, most of the reviews are good, so maybe I was just cranky because I ran a marathon the weekend before, who knows?
Posted by Christie B. at 5:46 AM