I really don't think about whether the year was good or bad at the end of the year, but I always enjoy the feeling of closing the door on each year and setting out on a new year. (Kind of the same way I feel about relationships... even when they were good and I'm sad they're over, the sadness is never QUITE as strong as the feeling of freedom and looking ahead to the future.)

Anyway, I am mostly done planning my 2017 race schedule. This is what I have so far:

*January: Mississippi/Alabama back-to-backs, Mississippi Blues and First Light. This one is a sure thing because I've already registered for them and bought my plane ticket. (Although that alone does not really make it a sure thing, not with these races. I have actually registered for them TWICE and bailed on them both times. Once because of injury, once because of lack of money right after the holidays.) I went back and forth between this double and the other choice for the Mississippi/Alabama double in February, Mississippi River and Mercedes Marathon in Birmingham. It was a tough choice; part of me wanted to do the Miami Marathon January 29 and then the double in February. But the thing that made my decision was the plane fare to Miami. It was really, really high. In the end I couldn't justify spending all the money on Miami and then, three weeks later, doing another expensive trip down South for the double. Also, if I didn't do Miami and just did the February double, then I would be going over two months without a marathon, and probably without many (or any) long runs here in Michigan, which is not the best way to do a double. One more reason is that I really should save a marathon in the South for January/February of 2018, and Florida seems like a good choice for that. So, Jackson/Mobile it is despite the fact that I dread another back-to-back and I still think the Mississippi Blues medal is hideous and ostentatious. (I know, I am in the minority here since the Mississippi Blues medal is consistently rated one of the top marathon medals in the country. But so is Little Rock's, and everyone knows how I feel about that one.)

*April: Oklahoma City, last weekend of April. It's this one or Tulsa (Route 66) for Oklahoma, and I always planned on doing this one if I could get the logistics right.

*May: Fargo Marathon. There really is no other marathon for North Dakota, and also North Dakota is one of only two U.S. states I've never visited (the other one being Hawaii). Time to cross this one off my list.

*September: Equinox Marathon in Fairbanks, Alaska. This is going to be a full-on vacation, me and Will, touring sled dog kennels, all of that. (It has to be, because I never plan on going back to Alaska after this.) I'm just waiting for registration to open, or even just to hear for sure what the dates are. No word on the website yet, but this race has happened every year since 1962 so I'm pretty sure it will happen again in 2017.

*October: Baltimore for sure. The only race worth doing in Maryland. I'm crossing my fingers that I can be a pacer for this one but won't find out till next year some time. Regardless, I'm definitely doing it.

You may have noticed what's missing from this list -- Boston. I'm registered for Boston but have had zero enthusiasm for it this whole year. It is the complete opposite of last year when I got a thrill just from looking at my confirmation card. I really never expected to not be excited about Boston, but I'm not. Therefore, I am not going to do it. It's expensive and complicated and this year butts right up against the family vacation in Vegas for my brother's wedding. I really don't want to have to do Boston and then fly across the country to a wedding. (Even though I am now going to fly across the country for a wedding and then come back home and go down to Oklahoma for a marathon.) But, Christie, what if you never qualify for Boston again and regret not doing it? Well, then I guess I will have to live with that regret. But honestly, I don't worry about it because I am pretty sure I am incapable of regret. With a lifetime full of questionable decisions, I have yet to regret any of them, leading me to believe I am constitutionally incapable of regret, which is not something I'm complaining about!

So, I have six races planned for next year. If I do all of them as planned, that will leave me with the following states for 2018:

*Arkansas: Sigh, I'm going to do Little Rock, hideous medal notwithstanding. That's in March, and I'm not 100% sure I won't squeeze it in this year if time and money allow.

*Florida: Lots of choices here -- Miami, A1A in February, Southernmost in October, lots of others I don't even know about. Leaning towards A1A right now, but in the end it will probably come down to what fits my calendar best.

*Kansas: Not sure which one here... maybe Garmin in April 2018, or maybe Prairie Fire in October 2018, or maybe some other random one I don't know about yet.

*New Jersey: I decided I want New Jersey to be my #50, and because I can't do Honolulu till December 2018, I can't finish till May of 2019 with the New Jersey Marathon. Why finish in New Jersey? Well, for one thing, because no one else does. There is nothing special about New Jersey, but finishing in Hawaii is such a cliche. The other reason is because I started running when I lived in New Jersey, but never actually ran a marathon in New Jersey. Also, I am sort of attached to New Jersey even though every single thing about it except The Seeing Eye sucks.

*Wyoming: Still haven't picked my Wyoming marathon either, and am not 100% sure I won't try to sneak it in this year either. All my choices are between May and September, and there are no easy races in Wyoming. So we'll see. 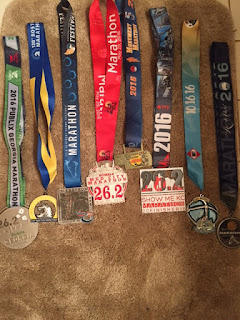