St. Patrick's Day always reminds me of that joke: Someone asks you, "Got any Irish in you?" to which you respond, "I did once!" Okay! Off-color joke dispensed with, race report commencing.

From now on I am not going to sign up for any races anywhere other than the Southwest or California that don't take place between April and October. It's just not worth it! The chance of freezing your ass off is too great.

This morning it was a balmy 12 degrees at the start line of the Corktown 5k in Detroit. 12 degrees real temp with a 0 degree windchill. It could have been worse -- at least there was 0% chance of snow! I had to get there early because I wasn't sure about parking. The start line was right in front of Detroit's most famous abandoned building, the Michigan Central building. This: 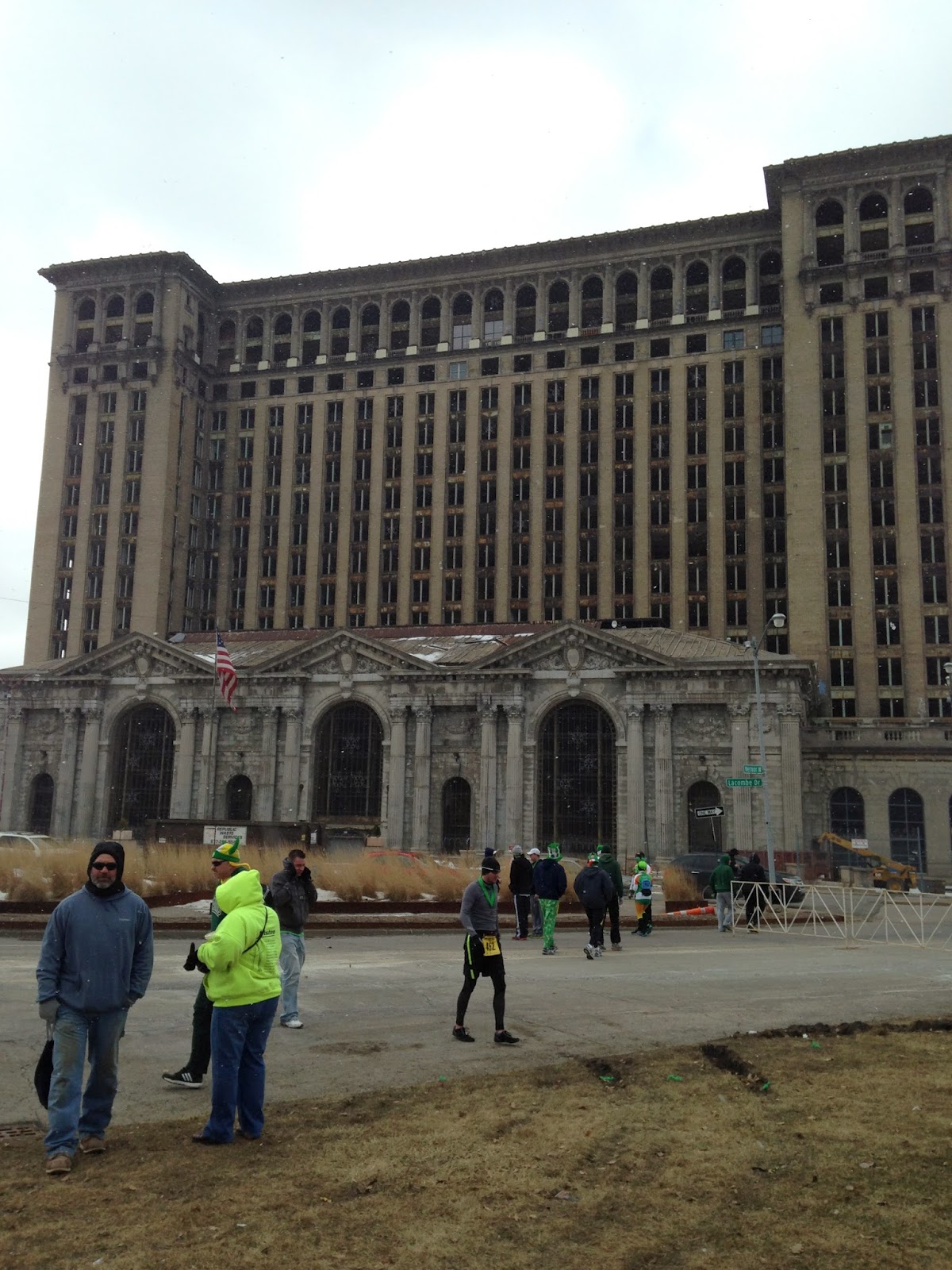 It was also surrounded by lots of Detroit's less-famous abandoned buildings. Altogether a bleak and depressing scene. I did my homework before the race and found out that Corktown is Detroit's oldest ethnic neighborhood. First Irish, then Maltese (really! I always thought that was just a dog breed, not a nationality; shows what I know), then finally Latino. I couldn't tell what it was today other than empty. The St. Patrick's Day parade follows the race but it would take a braver and hardier person than me to stand out in that cold for any longer than I had to.

I sat in the car wrapped up in my giant, puffy jacket -- more like a comforter with arms and a hood -- running the heater until twenty minutes to start time. I spent the whole time berating myself for thinking one pair of threadbare tights was enough for a 0-degree windchill and wondering if I should just go home. But if I went home I would have nothing to blog about. Plus I was curious to see what my 5k time would be. It's been so long since I did a 5k I really didn't know.

I left my jacket in the car and stepped out into the icy cold wind and wanted to cry, but instead I just got in the porta-pottie line and began jumping up and down, running in place, and cursing the cold like everyone else was. I wanted to say this was the coldest I had ever been at a race start line but I knew that wasn't true. Nothing will ever be colder than the 3 hours in Hopkinton at the Boston Marathon start line. At least here I only had to be outside for 20 minutes before the race started.

Once I had gotten in my corral -- this is a huge race, and they had 4 waves -- the announcer said there were still lines at the registration table so the start was going to be delayed by 5 minutes while we waited for those people to finish registering. This generated a mass "Booooooooo!" from the runners and liberal use of the F-word as well as generalized grumbling. Come on, people, preregister or get here on time, seriously! We hopped, jumped, and ran in place while waiting. At least the Irish music booming through the speakers was exciting.

Finally we started. The race is an out and back down Michigan Avenue. The icy wind was straight into my face. I was wearing a neck gaiter but it promptly got wet with condensation from my breath and then froze stiff. The air was so cold my teeth hurt even with the gaiter covering my mouth. I consoled myself with the thought that it would be a tailwind on the return. My feet felt like blocks of ice clumping on the cobblestone street but I was making good time. I think Corktown might be a cool place to visit in, say, July. Not today.

When we got to the turnaround it was immediately obvious that the wind was still blowing just as hard. That HADN'T been a headwind at all, it had been a crosswind the whole time, and still was. I swear that often in my Michigan workouts the wind blows out in all directions from the center point of my workout loop. This was one of those times. But by this time, I didn't care because I was more than halfway done. As I got within sight of the finish line, I was passed by a guy running shirtless. I swear that no matter what the temperature, there will always be someone wearing hardly any clothes and claiming to run better that way.

I finished in 24:18, a 7:38 pace, which was about as good as I could've hoped for. I would've been happy with anything 8:00 or faster. Considering my winter fat, 7:38 is a respectable pace. As I crossed the finish line, it started to snow, big, fat flakes, and I wondered for not the first time why any Michigan forecaster would ever say 0% chance of anything weather-related. I say there is always a chance, for anything at all! By the time I got to my car, I could barely even see Michigan Central because of the snow. But by the time I pulled out of the parking lot, the snow had stopped and the sun was shining again.

This week's forecast looks much more promising, with nothing in the teens and a couple days in the 40's. I'm hoping for some good outdoor running!
Posted by Christie B. at 5:10 PM