Marathon # I Don't Know Exactly, State # I'm Not Sure Anymore

I never thought that I would lose track of how many marathons I've run or how many states I've done, but, surprise! That happened. I THINK this is my 25th marathon and my 18th state but I will have to go home and count bibs on the refrigerator or else get a big US map and check off states to know for sure.

I always knew my Ohio marathon would be Flying Pig, just because it's the biggest and most famous and Ohio is not a state I ever get excited about for any reason, so I figured I would need to do a fun marathon just to make Ohio enjoyable at all. In my head all of Ohio is flyover country and boring. If I hadn't moved to Michigan I'm sure this would have been one of my last states. But because I DID move to Michigan, I signed up for it. It happens to be on my birthday this year. I'm 37 and I take great pleasure in the fact that not only am I running a marathon on my birthday, but also I look better than I did at 17 AND at 27! Take that, aging process!

I was surprised to find that Cincinnati is actually a really pretty city, with the river and the hills and the bridges and the trees and the cool downtown buildings. I did notice as I was driving to the hotel that there were an awful lot of hills. The course was described as hilly too, although I had looked at the elevation profile and only saw one that looked sort of bad, and even that one was only a 400' climb spread out over a few miles. So not bad at all. I wasn't expecting great things from this marathon. I'm both seriously undertrained and fat. I mean, I ran a 20-something back in mid-February and then everything got all messed up because of the move and the cold. Literally I ran one 16-miler in early April (and fell apart on the last 2 miles of that) and then did the 16 miles of Kamran's trail ultra a couple weeks ago -- but that was not really much running. Other than that I've done a couple of 10-to-12 milers and that's it! I just barely decided I was going to lose weight and requalify for Boston a couple weeks ago, but I haven't done that yet and am 20 lbs over my Boston-qualifying weight. So I was not expecting anything great and didn't really even want to try. I planned to walk whenever I wanted and be without a time goal other than that I really should be under 5 hours.

I must say this marathon was one of my favorites. They've had the same race director for eleven years and there was not a single thing about the race that didn't go smoothly. The weather on race morning was warm. I had debated over whether to wear my Boston Marathon shirt or my Marathon Maniacs shirt. I decided last night it would be the Maniacs shirt because it was sleeveless, but then when I tried it on last night I saw that I was too fat to wear it. A roll of stomach fat was hanging out under the bottom of the shirt. Can't have that! Boston shirt it would be, even though I thought it was really too warm for that. I figured I could always roll the sleeves up.

At the start line, we could go into Paul Brown Stadium and use the bathrooms there. There was enough room in the stadium to run your warm-up there, if you wanted to. I imagine that is much appreciated in rainy years. I was warm at the start, always a bad sign. But there was a beautiful pink and orange sunrise straight ahead. The start line was right downtown next to the river. Everything was very well-organized and went off without a hitch. The streets on the course were wide and for the number of people running (20,000 between the half and the full, which started together) there was hardly any of the run-a-few-steps-then-screech-to-a-halt-because-of-congestion that there usually is at big marathon start lines. The first few miles went through and around downtown. We ran over one bridge into Kentucky, and then over a different bridge back into Ohio. I was grumpy and did not want to be running. I don't know why. I was just thinking of all the things I would rather be doing, like lying in the hotel taking a nap, or reading my book or spectating on the sidelines with Frieda. My feet hurt for no reason, my leg hurt for the stupid reason that I had tripped going up the stairs to the bathrooms at the start line and given some muscle a little pull, my U of A visor was bugging me because it was too low over my eyes but if I tightened it so it would stay up then it would be too tight and uncomfortable on my head. Et cetera. I wanted to quit, pretty bad, for no real reason. I scolded myself and reminded myself of Tom in Zane Grey, Kamran in the 100-miler, all the WOGgers in Boston, Keith who just won a marathon yesterday, none of them quitters. I bitched and moaned in my head for the whole first 5 miles and then we hit "the hill" and suddenly, inexplicably, I felt better. I ran all the way up the hill feeling fine. About 2/3 of the way up we went into Eden Park, which had such stunning views of the city and river that I wanted to stop and stare. But I didn't, I just kept running.

Okay, so this race does have some up hills but it has a lot of downhill too. So much that by the half-marathon I was wishing it would flatten out or even climb again. My quads were sore and both my ankles and my Achilles hurt. I love Newtons but I do feel like they don't really have much stability, especially around the ankles. Any suggestions for shoes with the same heel-toe drop as Newtons but more stability would be much appreciated!

My half-marathon time was 1:55, which would be a 3:50 finish if I kept it up. I had no plans of keeping it up, just wanted to keep running until I couldn't run anymore so that I could get done as soon as possible and get to the eating part. My brother had mentioned something about a grilled cheese donut and I wanted that, bad, whatever it was. It was sprinkling rain and had actually gotten cooler since the start. The forecast had been for 30% chance of rain the last time I looked at it; well, someone got that wrong because it rained for the rest of the race. I didn't mind that -- much -- because it wasn't, at that point, a miserable downpour, just a light rain that made me glad I wore my long sleeves after all.

Miles 16-18 is where I usually fall apart but today I was strong through those miles. I got to twenty miles at 2:57 and knew I had it in me to go under 4 hours, if I wanted to. I still didn't care. But I did think I should keep running unless an obvious reason to walk presented itself. My feet hurt but not terribly, and I wasn't nauseous like I usually am. Also, the course was a gentle downhill practically all the way to the finish. I just kept running.

When I got to Mile 24 it was obvious I would be right around 4 hours exactly. I was running long according to my Garmin -- .33 miles ahead of the race mile markers, which meant I would run 26.5 miles, not 26.2. I was annoyed with myself because I had run fast enough to make 4 hours attainable (I had been planning on a 4:20, 4:30-ish finish or maybe even more, but there's no dignity in a 4:02 finish.) Plus, the 4:00 pace group had appeared out of nowhere and were right on my heels. I could not bear to be passed by the pace group at Mile 25, so I had to speed up.

I could see the finish line right in front of me and I saw 3:58 on my Garmin, so I had to speed up racing down the chute to the finish. I stopped my watch on 3:59 and hope it matches my chip time; who knows when I actually pushed "Start". The rain had turned into a downpour by the time I walked through the Recovery Zone, picking up huge handfuls of fruit and crackers and bars and water and everything else I could carry. I was soaked by the time I got to the car. I felt bad for all those people still out on the course. Even now, many hours later, it is STILL pouring outside. Hasn't let up at all. I will not be going outside if I can help it!

Overall I am really pleased with my time. It used to be a big deal to be under 4 hours, and my average marathon time is still 4:10, so to do 4 hours when I haven't really been training is pretty cool. Happy birthday to me! This was a great marathon and for anyone looking for a nice course and the "big marathon" feel without the big marathon logistics complications, I totally recommend it. Plus, it has a really cool medal: 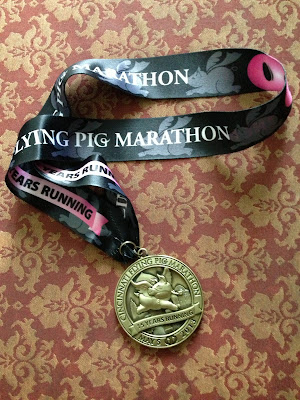