I know, I know, you're sick of hearing about my toenails. Well, too bad. This is my blog and I can write about whatever I want, and I feel like writing about toenails today. I also feel like putting in pictures. However, I did do you the courtesy of putting the pictures waaaaaaaay down at the bottom, so they won't jump right out and scare you. I must warn you that they are extremely disgusting. Extremely! So don't look if you have a weak stomach or if you think that you might not be able to look at me without the sight of me triggering a gag reflex after you see them.

Some people (non-runners, obviously) don't get why things like this happen to toenails. Here is why. When you run long distances, especially down hills, your toes bang against the toebox of your shoes. Times a million in a long distance race. I am pretty sure this is inevitable. It's happened in many different brands of shoe. I don't think it has anything to do with the shoe being the wrong size. These shoes feel like they're exactly the right size. If I went up a half a size, my foot would be sliding around and would hit the toebox with even more force; if I went down half a size my toes would be squished in the front of the shoe and would start their blistering even before I hit the hills.

Multiply the impact of the toe hitting the toebox times... some really high number, and eventually you get a blister under the nail from the friction. If the blister is bad enough (and here's where my science gets murky and I'm too lazy to google, so I'm basically making this up), it somehow causes the nail to disconnect from the nail bed. Or maybe it happens because the nail sits and marinates in the liquid from the blister all day. I don't really know. But eventually the whole nail will just lift off, and you are left with smooth, shiny pink toe skin just like the day you were born.

Not! More likely you're left with (see below) an oozing crater with shards of nail clinging to the edges of the nail bed because the nail wasn't quite ready to be detached but you got impatient and numbed it up with ice and yanked it off because you got tired of it flapping like a saloon door in an old Western movie and catching on your blankets in bed and making you wake up screaming every time you turned over. Yeah, I know I'm not the only one who's done that.

Okay, I've made you wait long enough, scroll down past the pretty picture of pretty Chloe (you'll need this cuteness to inoculate yourself against the grossness that's coming next) if you reeeeaaaalllly want to see... 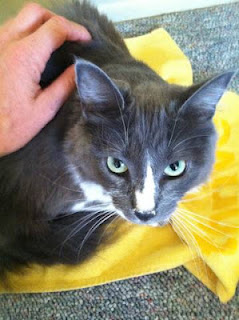 The first picture below is of my right big toenail... or, more accurately, the place where my right big toenail used to be. It turned black after Pikes Peak but hung around until after the 50, when it pretty much gave up the ghost. I went ahead and pulled it off, and it came off except for in the right corner, where it was still attached firmly. That hurt. Like pulling off a hangnail. And the fact that I left a tiny speck of toenail there means it will grow back in all uneven and double-thick and disgusting. Like a little horn. 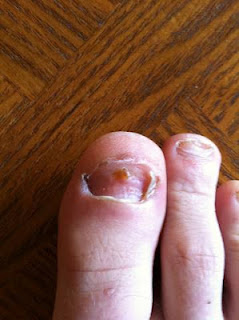 The next one is of my left big toe. I call this one my zombie toenail because it turned fish-white instead of the usual black. (Though today it's looking yellow, maybe due to the hydrogen peroxide soaks?) Anyway, the blister under this one popped and drained and I should have just left it alone, but noooooo. I can't leave scabs or dead toenails alone; I just can't. So I picked at it and picked at it and eventually got it at least halfway off -- but it stopped there and wouldn't go any further. Now what? It hurts too much if I try to pull it all the way off. But if I leave it on it catches on everything. Solution: leave it on, soak it often, hope that the soaking softens it up enough to pull it all the way off eventually. And bandage it during the day so that my sweaty feet don't make it stick to my sock and create a nasty mess when I take my sock off at the end of the day. 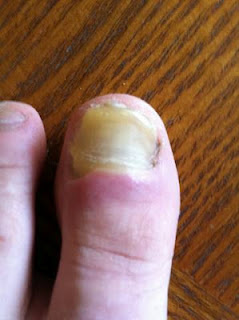 You know, the sad thing is that my feet are structurally perfect. Really, they are. I don't have a foot fetish but the shape of my feet makes me want to get one just so I could worship my own feet. Then THIS shit goes and happens to my nails, making me want to throw up. I have heard it said that no matter how gross something is, someone, somewhere, has fetishized it, but I am pretty willing to bet that no one has ever fetishized ultrarunners' feet. And if someone has, that someone is a sick, sick individual.
Posted by Christie B. at 5:21 PM