On Feet and Shoes

I have the most disgusting toenails ever! Or, rather, I should say I have the most disgusting TOES ever because not all of them even have toenails. On some of them, the nails fell off and never came back. So. I work with mostly old guys at the V.A. (average age I think 82), so I know something about disgusting toenails. It seems like as you get older 1) your toenails get thick and yellow, like little horns, and 2) you stop giving a crap if anyone sees them. Well, I can say with authority that I am advanced in the area of feet, because both of those things have happened to me already at the tender age of really-really-close-to-36. I'm going to put a picture of my gross toes at the bottom of this post -- so if you have a sensitive stomach, or think there's a chance that you and I might ever intentionally be naked together for some other purpose, for the love of God STOP before you get to the bottom! On that note, if anyone knows what I can do to fix these hideous things, please tell me. But don't tell me to go get a pedicure. There's not enough nail for them to fix and I don't want to scare the poor nail tech with these things unnecessarily.

Moving along! Everyone knows how excited I was about the Hokas. Hokas seemed to be the answer to my problem with wimpy feet on the trail. They have a ridiculously padded midsole that promises to cushion wimpy feet like mine from big, mean, pointy rocks and other stuff on the trail. They are prohibitively expensive -- $175 -- but I finally sucked it up and bought them because I had to know if I was ever going to find trail running anything more than pure and total misery or if I should just put the idea of another 50-mile race out of my head completely. I had to go all the way to Phoenix to get them since no one carries them locally, When I tried them on, they felt all wrong. My feet slipped and slid around in them, which jammed my toes into the toebox painfully. And this was just running outside the store! We went down a half a size and this worked better, although they still didn't feel great. Let me amend that -- the cushioning part DID feel great, just as advertised. I decided I had to have these shoes and would get used to the toe thing or wear thicker socks or just tape my stupid toes together or maybe cut them off or something.

My first couple of runs with them -- 4 and 6 miles -- were disastrous. My toes did slide around just as much as they had in the store, even with a half size smaller. The tips of my toes were all red and shiny and ready to blister. After the first run I was ready to return them, but as soon as I walked in the door Dylan stepped on them with muddy feet from his brand-new separation anxiety drooling and they looked used. I decided to keep going with them since it was either that or accept the fact that I had just thrown $170 in the garbage. Besides, aside from the toe slippage problem I did like them -- a lot. They had traction like no other shoe I'd ever had, letting me run down even the nastiest slopes where the trail was nothing but rocks, and they cushioned my feet from all impact, making the trail feel like the road. (And making the road feel like hell, incidentally. On the road they feel like giant, awkward boats strapped to my feet, and I just can't get my footstrike right.)

On that third run, magic happened! The toe problem just disappeared. I can't explain it. Maybe the super-expensive shoe material just melded to the shape of my foot? Who knows. Who cares! I ran 10 miles on the Starr Pass trails with one of my fastest times ever. Then, that weekend, I really put them to the test with 18 miles on the Bear Canyon Loop with a Phoneline return. I also managed one of my best times on that route, with no problems except that the side of my right pinkie toe rubbed up against the side of the shoe in the last 5 miles when my feet swelled up a little. But that can be easily fixed with a little bit of tape next time, or, who knows, maybe it won't happen next time. (Next time will be Mt. Wrightson next weekend.)

The pictures below are from the Hoka website and are of the exact shoe I got, so you can see how geeky-looking it is (and so we can all enjoy the sight of that ripped leg -- yeah, I had to get men's shoes;  actually I think the salesguy told me the Hokas were all unisex, but according to the website they're not -- who knows).

Having taken a chance on the Hokas and liked them, I decided to do the same with some new road shoes, Newtons. I have always been favorably disposed towards Newtons because of their extremely flamboyant colors -- neon blues, greens, oranges, etc. I looked them up online and found that they were designed with minimal heel-toe drop -- which as I understand it means that, as opposed to regular running shoes, the heel is not significantly higher than the toe, which is supposed to promote forefoot striking. I trained myself to be a forefoot striker when training for my BQ Marathon, but I have gotten so sloppy with it following a year of trail running that I was really excited about the possibility of anything that would help me improve. So I tried on a pair and loved them immediately, after a couple steps on the treadmill.

Here's why I love them: they have a little springy padding right in the forefoot, but nowhere else. If you forefoot strike, and land on that padding, it feels like a little boost straight up into the air. I swear I hear the sound "booooiiiing" in my head with every footstep. If you DON'T forefoot strike, though, it is extremely uncomfortable, like the whole sole of your foot is getting whacked with a board with a big bump in the middle. So if you can't be honest and stay on your forefeet while running, get some Newtons and they will do it for you. The only downside: if you haven't been forefoot striking, as I haven't (consistently), your calf muscles will have something to say about it. After 9 miles between my house and the Cinco course, where I foolishly attempted to keep up with people I used to be able to keep up with but can't anymore, my calf muscles were in such agony I had to walk the mile and a half home, and even walking it was painful. But that's just a matter of toughening them up. My body's not the boss of me!

I'm done here, except for the promised picture of my toes... scroll down, but, please, only if you really want to. 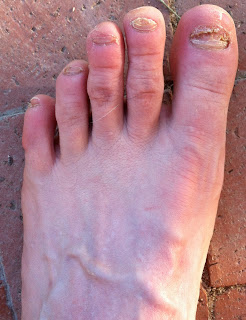