TAPER -- The Most Beautiful Word in the English Language

For all of you non-runners, "taper" when applied to running can be defined thusly: "the training phase right before a long distance event, such as a marathon, when a runner starts to cut back on his or her mileage." In other words, I get to run less after today's run. Glory glory hallelujah! I thought this day would never come, but here it is.

Today's run was scary to contemplate -- 28 miles in the Rincons. It would have been even scarier if I had looked at an elevation profile. Thank God I didn't because I might not have even gotten out of bed this morning. The run went like this: 9 miles up Douglas Spring Trail to Cowhead Saddle, then another very long -- 12 miles? 13 miles? something like that along the Tanque Verde Ridge trail to the picnic ground at Saguaro East, then another 8 miles along the road and trails of Saguaro East.

Here's the thing: Doug Springs Trail and I have a murky, twisted relationship. This trail has made me do all of the following things at various points in my running history: cry, throw up, sit down on the trail, turn around two miles into a planned ten-mile run and walk back to the car, pitch a fit after nearly stepping on a rattlesnake, swear off trail running alone because I thought I saw a mountain lion, swear off trail running altogether because it is so f-ing hard, and feel like a rock star for being able to run nearly the whole thing in a relatively good time. That last one is the least common, by the way. I hate those first two miles -- a nasty, rocky, steep slog uphill with giant step-ups the whole way -- always have, always will. The good thing is if I get through those first two miles, there are about four runnable miles before I run into two more horrible miles up to Cowhead Saddle. So the best way to deal with Doug Springs is just to hold my nose and plunge in. And that's what I did today.

It was cold at the start, but not too cold. I was only slightly frozen in shorts, long-sleeved shirt, and gloves at the trailhead, and once I started moving I was comfortable. Except for the completely full pack on my back and the bottle in my hand. I hate carrying my own fluids but my miserable experience on the Redington 50k taught me something -- bring more than you think you'll need, because you'll probably need it.

I was with a good group to start -- the slow group. Everyone was walking the uphills, which was all of it past about the first half mile. Even walking it is hard. Have I mentioned I hate step-ups? I do. But eventually we got to the more runnable part of the trail and I started thinking about getting to Doug Springs campground, 6.5 miles up. There was an outhouse there and I had somehow forgotten to pee before leaving the house. Oops, big, uncomfortable oops.

Here's another thing -- I have learned that you never, ever think of the whole distance ahead when doing long distances. You have to break it down into segments. My segments went like this: first two miles; 4.5 miles to the campground; 2.5 more miles to Cowhead Saddle; unknown but really long distance on Tanque Verde Ridge (which I pictured, oh so mistakenly, as a gentle descent down into Saguaro East); aid station to Cactus Forest Trail, one mile; Cactus Forest Trail to road, 2.5 miles; road to Loma Verde Trail, somewhere around a mile; Loma Verde Trail to Squeeze Pen Trail, very short distance; Squeeze Pen Trail to Carillo Trail, 1.2 miles; Carillo Trail to Garwood Trail, .8 miles; Garwood Trail back to Doug Springs, 1.4 miles. The problem, of course, was that big stretch in the middle that I couldn't break up because I didn't know what it was like.

Anyway, I reached the campground and went straight for the outhouse. Mike appeared and warned me there was no toilet paper. "That's OK, I've got some," I said, and this would be a good time to admit that that was a LIE! I didn't have any, and the truth is I didn't care. I am so disgusting after a run like this anyway, I have to ask the question, who cares if I have toilet paper? I only had to pee; in case of a true emergency, like a #2 emergency, there was always GU wrappers and orange peels. But I digress. By the time I got out of there, I was in the very back of the group. I started the slog up to Cowhead Saddle being just able to see Julie and the other Christy way up ahead of me, and made it my mission to catch them.

I did catch them, and trailed along after them towards the saddle. I mentioned something about being glad we were almost there so we could start going down, and Julie, who has run all these trails a lot more than I have, said something about how when we got to the saddle, the real climb would start. I have never been past the saddle; in my mind, we got to start descending as soon as we got to the saddle. I didn't like the implications of what she said, so I just chose to ignore it. But as we got closer and closer to the saddle, I saw that the elevation numbers on my Garmin were nowhere near what they should be. This run topped out at 7000 feet, and as we came up to the saddle we were only at about 6300. That meant... I looked at the sign pointing to the Tanque Verde Ridge Trail, and saw that it went straight up. My spirits plunged. Nothing worse than expecting a descent, seeing a gnarly ascent instead, and putting that sight together with what Julie had said earlier. Ugh!

Well, okay, maybe it was just a short climb... But, no. It went up and up for a couple of miles. It was on an exposed ridge, and was getting colder and colder with the wind blowing harder. There were still lots of areas with patchy snow. Thank you Renee for taking a picture of me in the hated snow for my blog: 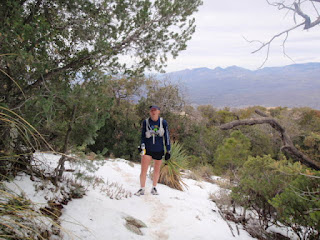 It will surprise no one to hear that seeing this snow -- and even having to WALK in it for a brief stretch -- did not make me miss New Jersey at all, not one iota. The expression on my face says exactly how I felt about the snow.

We'd been going up for 11 miles now. I was so tired of going up. My thought process became reduced to a few simple, one-syllable words, like a baby learning how to talk: "No more up. No more up." This nonsensical phrase looped in my head while we finished going up and finally started down. At last -- the descent! Here I could make up some time! But it was not to be. This was the kind of descent that was almost as slow as the ascent due to all of the following: steepness; rocks; scree; giant knee-jarring step-downs; and catclaw, shindaggers, and other thorny nasties stretching all the way across the trail just ready to rip skin to ribbons. And even after all this -- I wasn't even halfway done with this run! Unthinkable, obviously, so I didn't think about it. I just kept moving. Walked when I felt like it, ate when I was hungry, tried not to think about my warm bed at home.

Finally I got to a campground at Juniper Basin (which would have been how I split up this trail in my head, had I bothered to look at a map before doing the run). The sign there said 6.9 miles to the picnic area where the aid station was. I was alone now, with Julie and Christy somewhere behind me and everyone else in front of me. I felt very, very alone for about three more miles, then suddenly saw some runners ahead of me, not very far, and realized I wasn't as far back as I felt like I was. That was a great feeling, one of the few great feelings on that trail. Even after I passed the campground, it wasn't the gentle descent I had imagined. Instead of going straight down, it was rollers. Not big ones, but I swear anything is big after a 5000-foot climb.

Finally I got down to the aid station, just past Mile 20. There is nothing more beautiful than smiling volunteers at an aid station. And, as I've said before, food is different when seen through ultra eyes. Normal food changes into food from the gods. Soda is so amazingly delicious and refreshing I always just want to take it somewhere and be alone with it. I scarfed down a Pepsi, brownies, a banana, and some homemade bread. It's hard to overstate what caffeine does to the body when you're not used to having it. It's like an injection of rocket fuel. Eight more miles, totally NBD. No problem. I took off from the aid station and ran 4 straight miles under 9:00 pace, which is pretty good for Miles 21-25.

Then the Pepsi wore off and I didn't feel so good anymore. OK, I knew this was inevitable but I was almost done. So I slow-jogged the network of trails leading back to the trailhead. I was SO CLOSE to getting in under seven hours, but didn't quite make it and ended up at 7:02. That's not very impressive but the truth is on all of these ultra-distance runs I am just happy to finish.

In the past 5 weeks I've done marathon-or-greater distance every single weekend -- one road run marathon-length, then the disastrous Redington 50k, then the El Paso Marathon, then the not-disastrous Pemberton 50k, then today. Most of those runs were followed the next day by low-double-digit runs, 10-14 miles. I don't know when those distances became "normal". This has really shown me that the body can take a lot more than you think it can. Aside from losing a couple toenails, I haven't had any worse injuries than what I used to get from road running much shorter distances. And the trail runners I know aren't injured any more than the road runners I know, despite doing these distances weekend after weekend. So I think advice like "After a marathon, take one day off running for every mile you ran" is just a little over-cautious.

That having been said, I am completely, totally exhausted tonight. Normally these long runs leave me with a lingering buzz that makes sleep difficult, but tonight, I have been in a daze since I got home, the kind of daze where I can barely get off the futon to shower or to make something to eat and can't possibly drive to Dairy Queen to get the Oreo Brownie Earthquake that I totally want and deserve. I can't wait for my head to hit the pillow tonight. Thank God for a federal holiday tomorrow!