Re-experience the 20-Mile-Legs-At-Mile-One feeling from the Maine Marathon? Check.

My work here is done.

Just kidding, because I still have to write a race report. But at least I have the whistling sounds in my chest to keep me from getting bored while I write it!

This is one of the few running-related things I've done that I actually think was stupid. Lots of OTHER people think I do stupid running things, but I can usually justify them somehow or other. For this half-marathon, I have no justification except that I was already registered and it was the third in a series of three -- the Gabe Zimmerman Triple Crown -- and I wasn't actually injured. (Blisters are not injuries.) Therefore, obviously, if you were me, you would have to do the half-marathon. But it was stupid because 1) it was a hard course because of the "A" Mountain climb, 2) that amazingly-like-a-stress-fracture-but-obviously-not-a-stress-fracture-because-no-one-could-run-53-miles-on-a-stress-fracture pain hasn't really gone away, 3) I had nothing really invested in this race other than the registration fee, which I already got my money's worth out of with the first two races in the series (not like it's an out-of-state marathon that cost me several hundred nonrefundable dollars), and 4) I have been sick with this stupid cold/allergies/flu/whatever it is for several weeks now, and it will not go away, so obviously the last thing I should be doing is administering another punishment to my already weakened immune system. To run a half-marathon the weekend after running back-to-back marathons is pointless. To risk injury, illness, and getting your worst half-marathon time ever is retarded. Now that that is established...

It was cold this morning, in the 40's. I stayed in my hoodie till the last possible minute. When I finally had to take the hoodie off and felt the cold wind blow straight through my tech shirt from the Maine Marathon, I knew this was going to be 13.1 miles of misery. My shirt sleeves were already soaked from being used as Kleenex for my incessantly running nose. My friends from WOG were lined up on the start line, all of them looking skinny, fast, and, most of all, ready to run this thing, in direct contrast to me. I saw them in the start line and then did not see most of them again until I finished. I know a lot of people ran really good times today, so congratulations to them!

I ran my first mile at 8:00 pace. This was a great idea considering that I can count the number of 8:00 miles I've run since April on the fingers of one hand and have fingers left over. My second mile was 8:35 and it went downhill from there. By Mile Two I was already feeling pretty bad. My feet didn't hurt, but my legs were both numb from the cold and dead tired. You wouldn't think legs could be that tired after a week of doing basically nothing, but they were. They felt just like they did at the beginning of the Maine Marathon and I knew that I was going to enjoy this half-marathon approximately as much as I enjoyed the Maine Marathon.

The long, grueling slog up "A" Mountain took whatever remaining energy I had right out of me. I have run "A" Mountain dozens of times but today, with the cold wind, was one of the hardest ones ever. I was passed by what felt like hundreds of people on the way up, and even more on the way down. I am pretty sure I'm the worst downhill runner in Tucson, at least today I was. I reached Mile 5, the bottom of the hill, exhausted and tapped out on energy, but with 8 miles yet to go.

The rest of the race was divided into lots of equally boring, difficult stretches that shouldn't have been difficult at all (Mission Road, many miles of the Santa Cruz path, Fourth Avenue, Congress Street). They aren't difficult when I run them on training runs. And I have run all of them on so many training runs it's no wonder I think they're boring. This race confirmed my long-held belief that, for me anyway, it is a waste of money to run local races. I just can't see spending my money to run places I can run for free any time I want. It would be easier just to donate money to SAR without needing to do a race, too. This three-race series was an exception but I am pretty sure this was my last in-town road race.

Even though I had said going into this race that I was going to treat it as a recovery run, naturally that was impossible once I saw everyone running fast. Even though I knew I would not run it fast, I also thought I really should be able to get under two hours. (Says the person with a half-marathon P.R. of 1:41:00.) I assumed that would be pretty easy to do. Then I realized around Mile Ten that it was going to be closer than I had thought. My time at Mile Ten was 1:30 exactly. Surely I could manage 10-minute miles no matter how bad I felt, right?

Just...barely. I did finish under 2 hours -- 1:59-something. That was a little too close for comfort. I did appreciate the Hot Nerd Tim Bentley announcing my finish and also announcing that I ran two marathons last weekend. It took a tiny bit of sting out of my personal worst half-marathon time ever since I got to bask in a trace of the glory from the past weekend on what was really a pretty crappy day in my running "career".

But now it's over and I have no firm running commitments until Ragnar in February. And I have this awesome candle for completing all three races in the series: 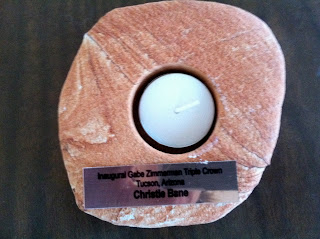 (Although I could have gotten this anyway without running the half-marathon, because it was pre-made. But I am not even going to think about that.)
Posted by Christie B. at 11:01 AM